Bioregioning Tayside Learning Journey 2022: What Will I Do When The Waters Rise?

Our second Learning Journey event focused on flooding, which, in the Tayside Bioregion is becoming more frequent as a result of the extreme weather caused by global heating and having serious impacts on both human and biotic communities .

We chose to focus on the small town of Alyth in eastern Perthshire as an exemplar for a number of reasons. The town has not only suffered increasingly severe flooding over the last few years, but its community has also started to develop new mitigation and adaptation responses as a result. 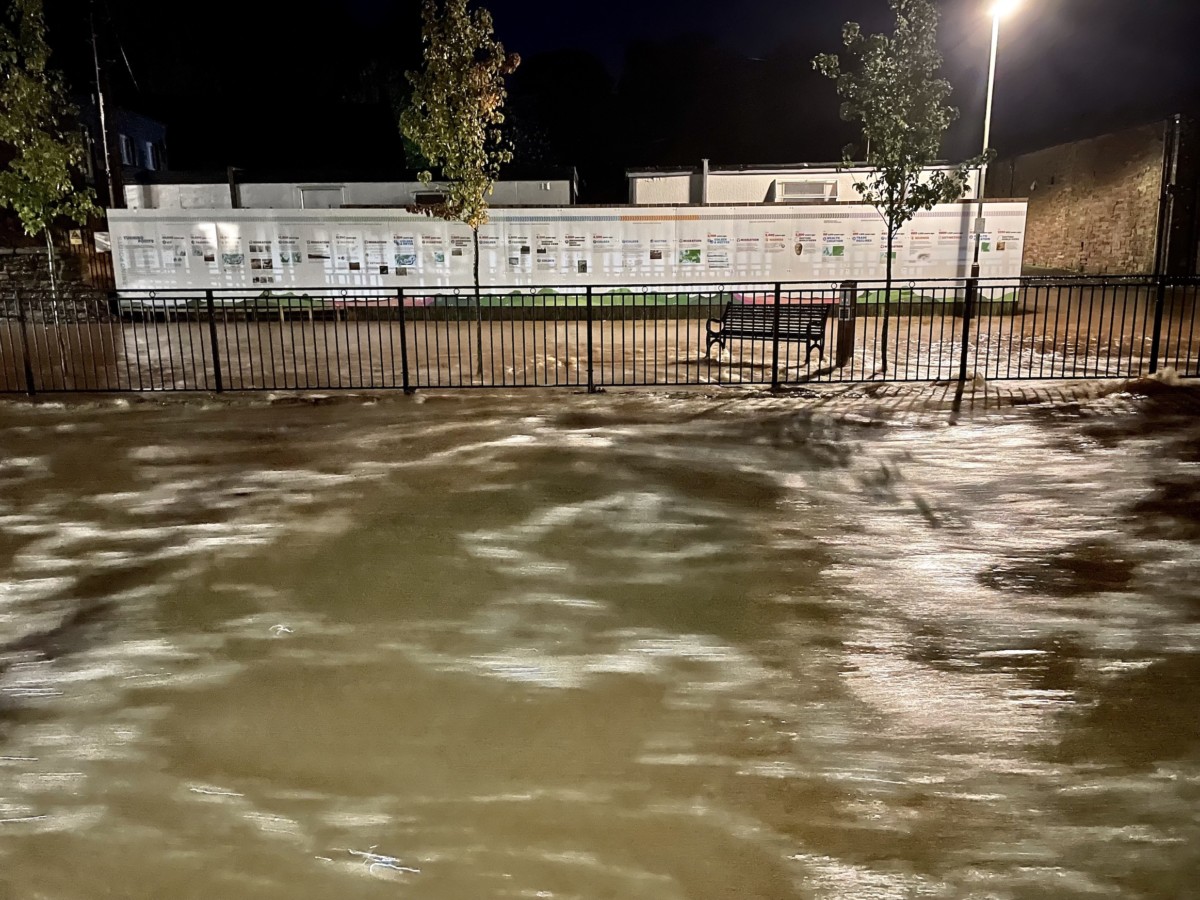 Welcoming people from across eastern Perthshire from the lowlands Strathmore to the highlands off Glenshee, the event focused on opening up conversations around three main topics:

Hosted by Alyth Development Trust (ADT), the town’s main community anchor organisation, Russell Willis Taylor, one of ADT’s Directors, set the scene by reminding us that “In every culture there is a myth or enduring story of the power of water as a cleansing event, as divine retribution or as a new beginning. This means that flooding has a visceral cultural power to inspire fear, and leaves an invisible trauma behind it even when the waters recede.  Creating a sense of agency in any place that floods is very important to offset this lingering trauma.”

The day began with a presentation from local Blairgowrie based geomorphologist, Dr Wishart Mitchell. An expert in ice sheet reconstructions, landslides and mountain geomorphology, Wishart used LIDAR and other maps, to explain how the retreat of the last ice sheet in this part of Scotland, some 11,700 years ago, has influenced the landscape and how the bedrock and glacial geomorphology have controlled the way the present catchment of the Alyth Burn is expressed. What this fascinating session revealed was how an understanding of what lies beneath our feet can help guide thinking on how to design flood mitigation and adaptation strategies today and what can and cannot be done. Indeed Wishart said “If you started from scratch today, you would not necessarily put Alyth where it is”. 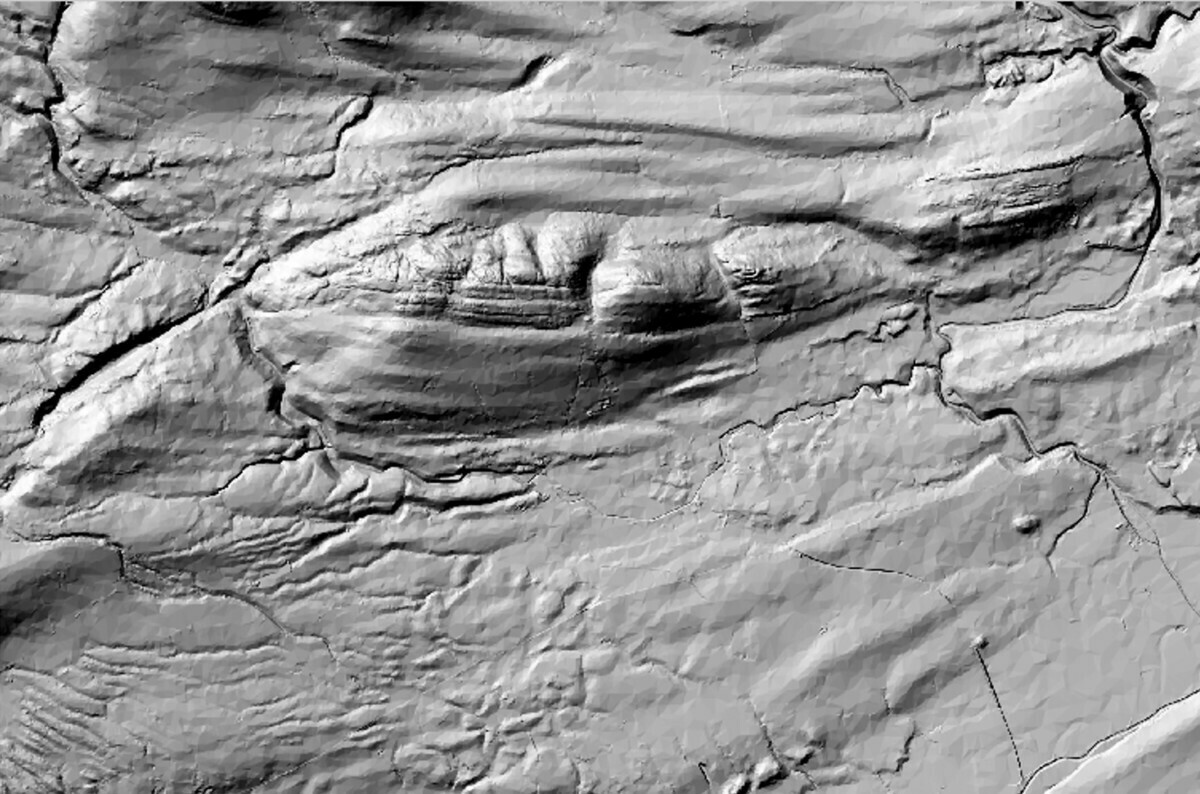 Grant Train, leader of the new Resilient Alyth Flood Team (RAFT) then summarised the proactive stance the town was now taking with regard to the increasing number of flood events it was experiencing. Following a very major flood in 2015, three River Track devices had been installed in the Burn in the town and further upstream in the Den ‘O’ Alyth through the support of the Scottish Flood Forum. These provide valuable warning time should water levels indicate that the river is likely to burst its banks.

Following a number of near and actual flood events in 2020 and 2021, a group of volunteers from the town set up the Alyth River Keepers. This group monitors 18 ‘pinch points’ along the water course in the Den ‘O’ Alyth, sites that have been chosen because they are either likely to collapse during extreme precipitation or allow the build up of debris which, if unchecked, could cause water surges further down in the town. Supported by The Conservation Volunteers (TCV), the River Keepers take photographs of each of the pinch points after extreme weather events and send them to TCV for record and analysis. 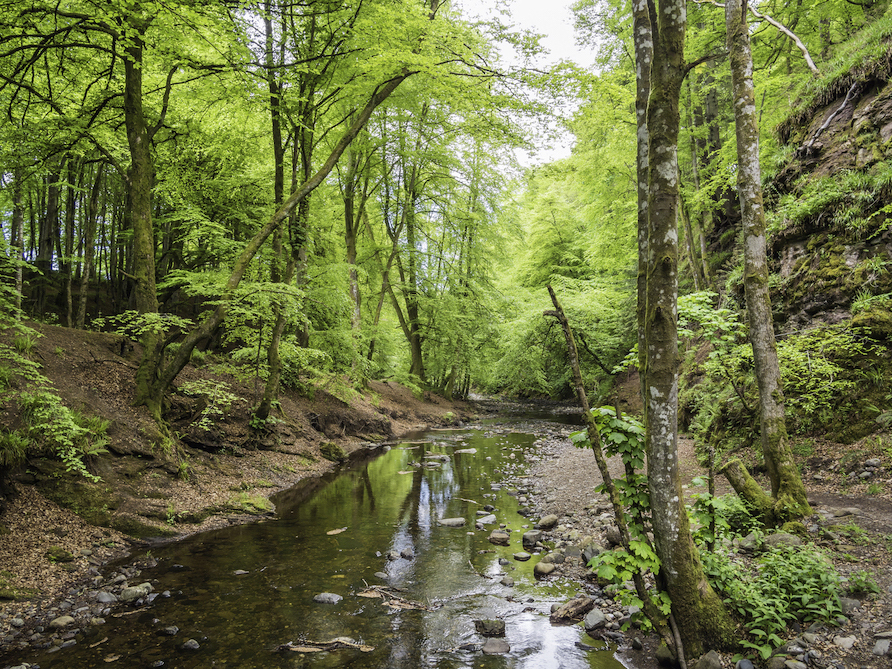 A third initiative launched in 2022 was Scotland’s first Retained Flood Team which Grant leads. Set up with support from the Scottish Flood Forum and with funding from the National Lottery Community Fund, this group will be trained to operate during a flood in a way that is similar to Alyth’s Retained Fire Team. A national pilot, the project is being watched keenly by other flood prone communities across the country.

And finally, following pressure from ADT, a new Natural Flood Management study is underway. This had been one of the major recommendations following the extreme flooding of 2015 but had been delayed. This will assess whether river/floodplain restoration and sediment management could help reduce flood risk. The study will take a catchment approach and consider the potential benefits and disbenefits and interaction between actions upstream and downstream. 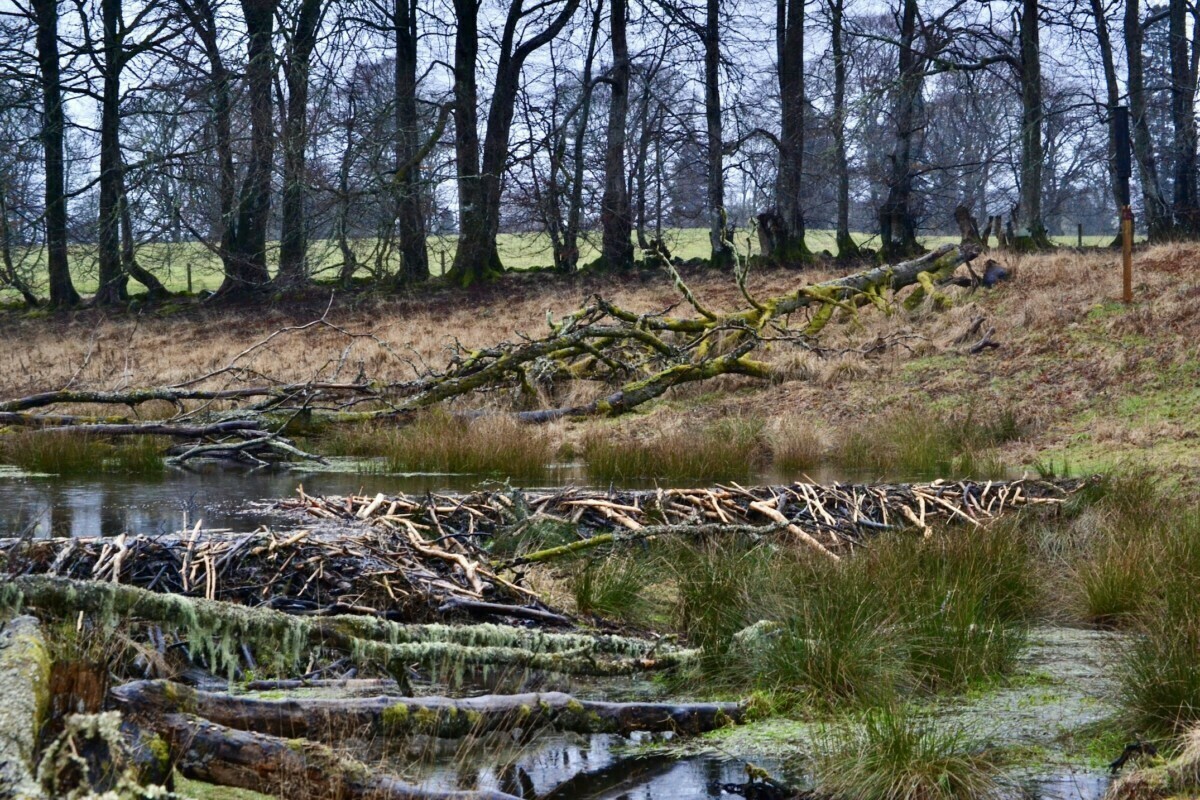 Natural flood management actions can have a positive impact on the ecological quality of the environment by restoring and enhancing natural habitats and given the Den ‘O’ Alyth’s designation as a Site of Special Scientific Interest, this will be an important outcome of this study. The damage flooding does to humans is generally well-documented, but wildlife populations are unseen casualties, with some ecosystems taking decades to recover.

Extreme flood events have a number of negative impacts on freshwater ecosystems. Floods increase surface run-off, exacerbating erosion and introducing more soil, organic matter and pollutants into water courses, whilst erosion within the river channel is also increased. Previous studies have shown that plant biomass and the abundance of both vertebrates – such as fish – and invertebrates can be dramatically reduced by extreme floods. For example, populations of the freshwater pearl mussel – an endangered species found in Scotland – can be significantly affected by extreme floods, which remove mussels from river beds and increase riverine pollution.

The Alyth River Keepers will be extending their role to monitoring the impact of flooding on the Alyth Burn’s natural habitats and encouraging other similar groups to form around neighbouring catchments. The aim is to co-develop new community-led management strategies that seek to improve connectivity of habitats and provide refuges to species during flood events. These kinds of actions will help increase ecosystem resilience, and the consequent recovery of the vital services to people that freshwater systems provide. 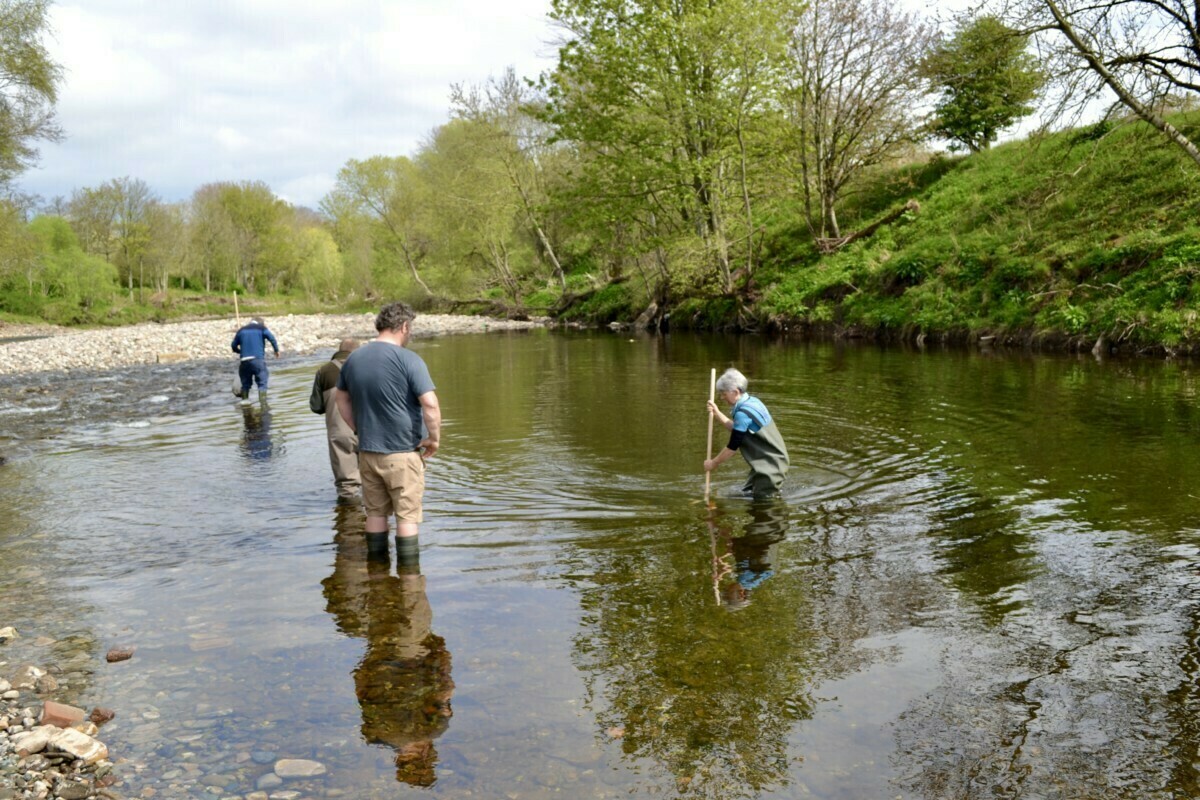 Following further discussion and a site visit to the Alyth Burn it was agreed that the event had been extremely helpful and informative, helping participants understand how broader physical realities influenced the impact of extreme weather and the many different kinds of practical steps communities could take to offset their vulnerabilities. There was a strong desire to reconvene with a larger group to see what further knowledge sharing might do to improve flood responses and that having representatives from town groups from a wider area, together with farmers, estate managers, environmentalists, emergency responders and safety experts in conversation with the type of technical expertise that Dr. Mitchell brought could only result in a more resilient Tayside Bioregion.

A resource for all: Scottish Flood Forum

On the psychological impact of flooding in a community, and what to do about it; a case study from Hull

How floods are wreaking havoc on wildlife 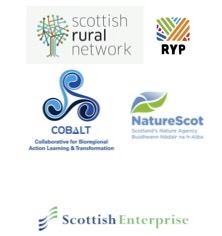 The 2022 Bioregioning Tayside Learning Journey ‘Change The Frame: Change The Story‘ was supported by the Scottish Rural Network, Scottish Enterprise, the Rural Youth Project, NatureScot and the Collaboration for Bioregional Action Learning & Transformation.

This entry was posted in News, Uncategorised

Bioregioning reframes the way we see the places where we live and work, helping us reconnect to and restore the ecological systems of which we area part and upon which we all depend.