We completed our 2022 Learning Journey ‘Change The Frame, Change The Story’ with a day co-hosted with Sustainable Kirriemuir and Dundee’s Botanic Gardens and a hugely ambitious question:  Can Tayside Become A Climate Action Sweet Spot? 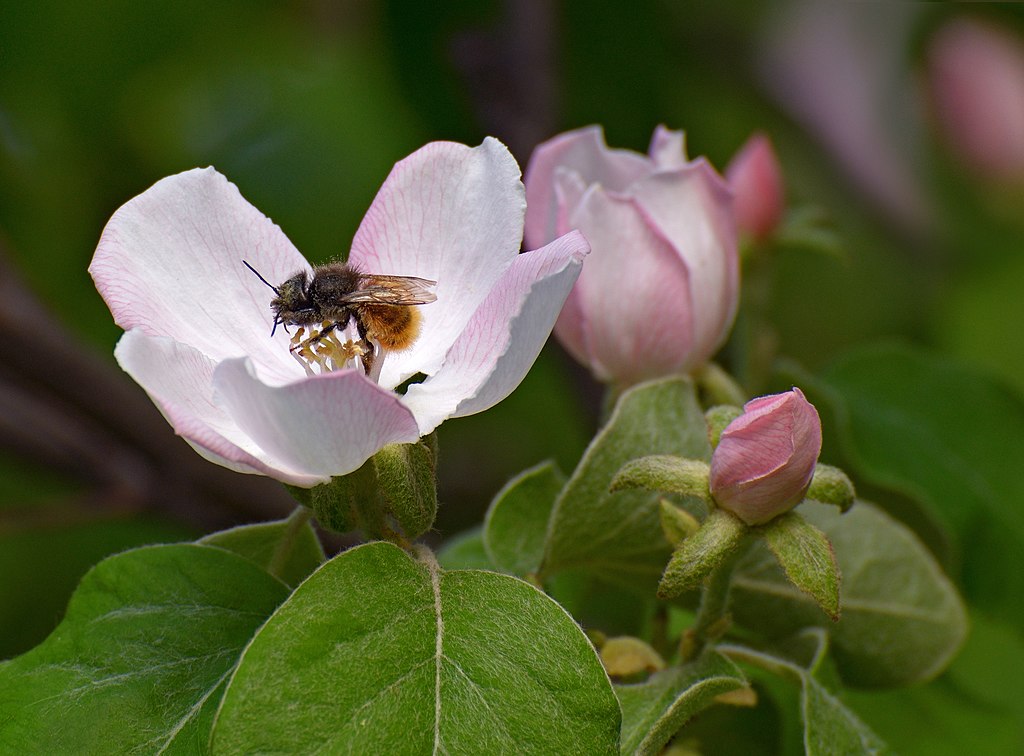 Inspired by the work of Dr Avit Bhowmik, Assistant Professor of Risk & Environmental Studies at Karlstad University and Professor Ilona Otto, Professor in Societal Impacts of Climate Change, University of Graz, both of whom contributed to our first Bioregioning Tayside ‘meet-up’ in the autumn of 2021, we invited a group of community based climate activists from across Tayside, together with other key players to co-imagine how we might achieve this.

The importance of activating social tipping points for the urgent climate action we need has been growing. In fact a special conference about them coincided with our workshop, convened by the Global Systems Institute and the Postdam Institute for Climate Action Research at Exeter University. In a paper especially written for that conference, Johan Rockström, co-chair of the Earth Commission and director of the Potsdam Institute for Climate Impact Research, said: “The world is heading towards 2-3°C of global warming. This sets earth on course to cross multiple dangerous (natural) tipping points that will be disastrous for people across the world. To maintain liveable conditions on earth, protect people from rising extremes, and enable stable societies, we must do everything possible to prevent crossing tipping points. Every tenth of a degree counts.”

Co-author of the paper, Tim Lenton, director of the Global Systems Institute at the University of Exeter and a member of the Earth Commission, said: “Since I first assessed (natural) climate tipping points in 2008, the list has grown and our assessment of the risk they pose has increased dramatically. Our new work provides compelling evidence that the world must radically accelerate decarbonising the economy to limit the risk of crossing climate tipping points. To achieve that, we now need to trigger positive social tipping points that accelerate the transformation to a clean-energy future.” 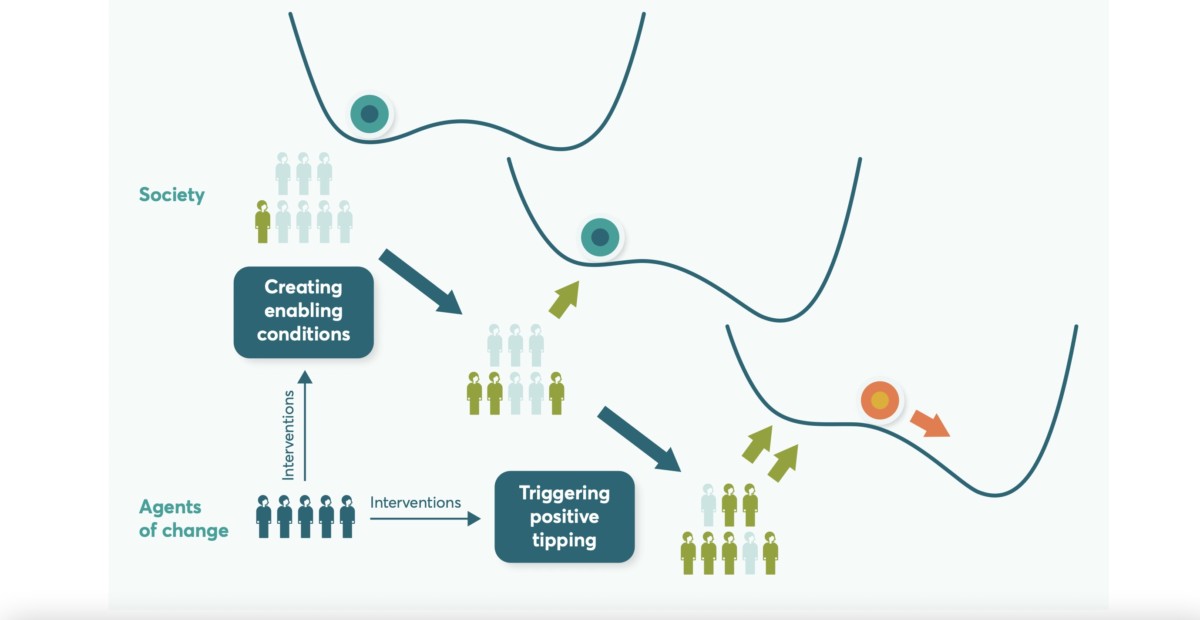 Our day was led by Dr Avit Bhwomik, who had travelled over especially to be with us.

Opening the workshop, Avit began by explaining the concept of social tipping points for climate action and how his work was evidencing that small communities changing behaviour to address climate action could lead to much larger scale change across society.

‘Natural’ tipping points in climate science are where a small change can suffice to irreversibly push a natural system into a qualitatively different mode of operation due to strongly self-amplifying feedback. Social tipping points work the same way but in a human social context and activating them could have hugely positive results in how we mitigate and adapt to climate change.

He urged us to really take on board that ‘You Matter More Than You Think’. Nations and governments were not leading the way, they were not acting quickly enough or radically enough. Fast and encompassing societal change would be much more achievable if we focused on the ‘sweet spot’ of small place-based communities taking action. “Focusing our efforts where we live our lives, fostering resilient, socially-just, and healthy communities, is where the action really is.” He said. 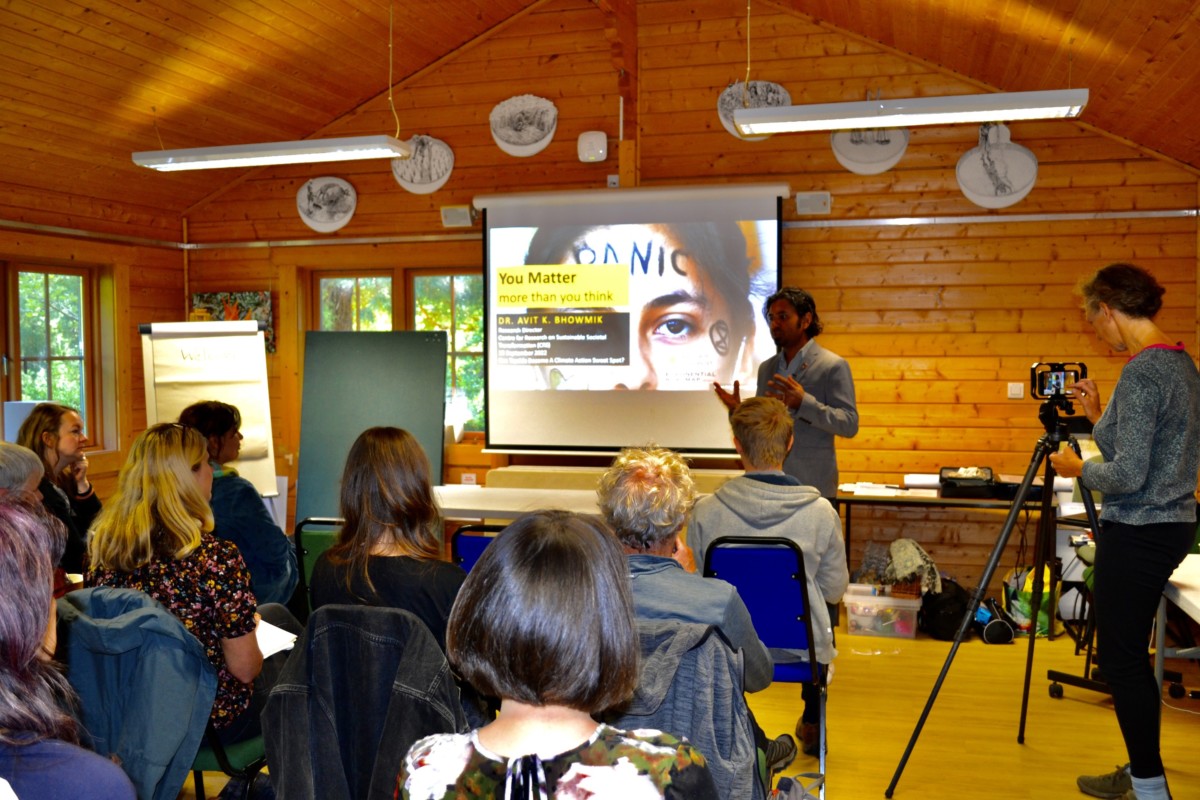 After Avit’s inspirational introduction, we began by mapping the climate action activities participants were involved with in their communities in Tayside. This revealed common themes, clusters and innovations. We then began to chart and share the back-stories of these initiatives asking each other: 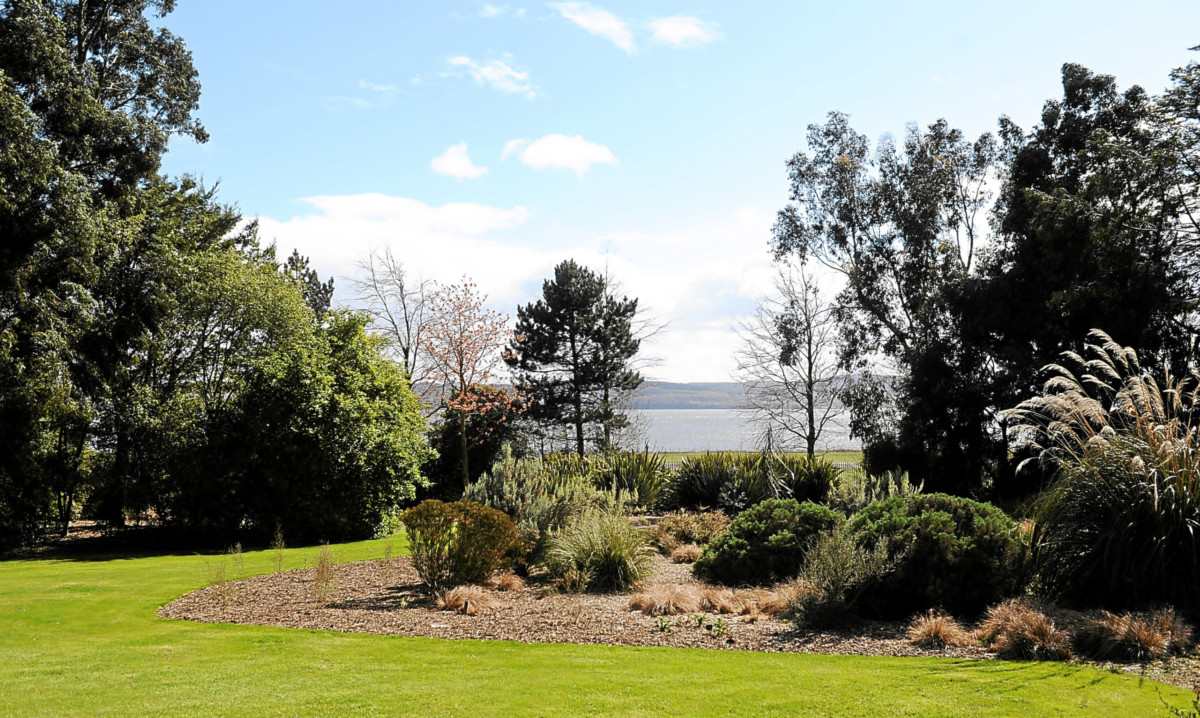 After a lunch break which was spent on a wonderful guided tour of the Botanic Gardens with our host, Curator, Kevin Frediani, we returned for our afternoon session to begin working out: 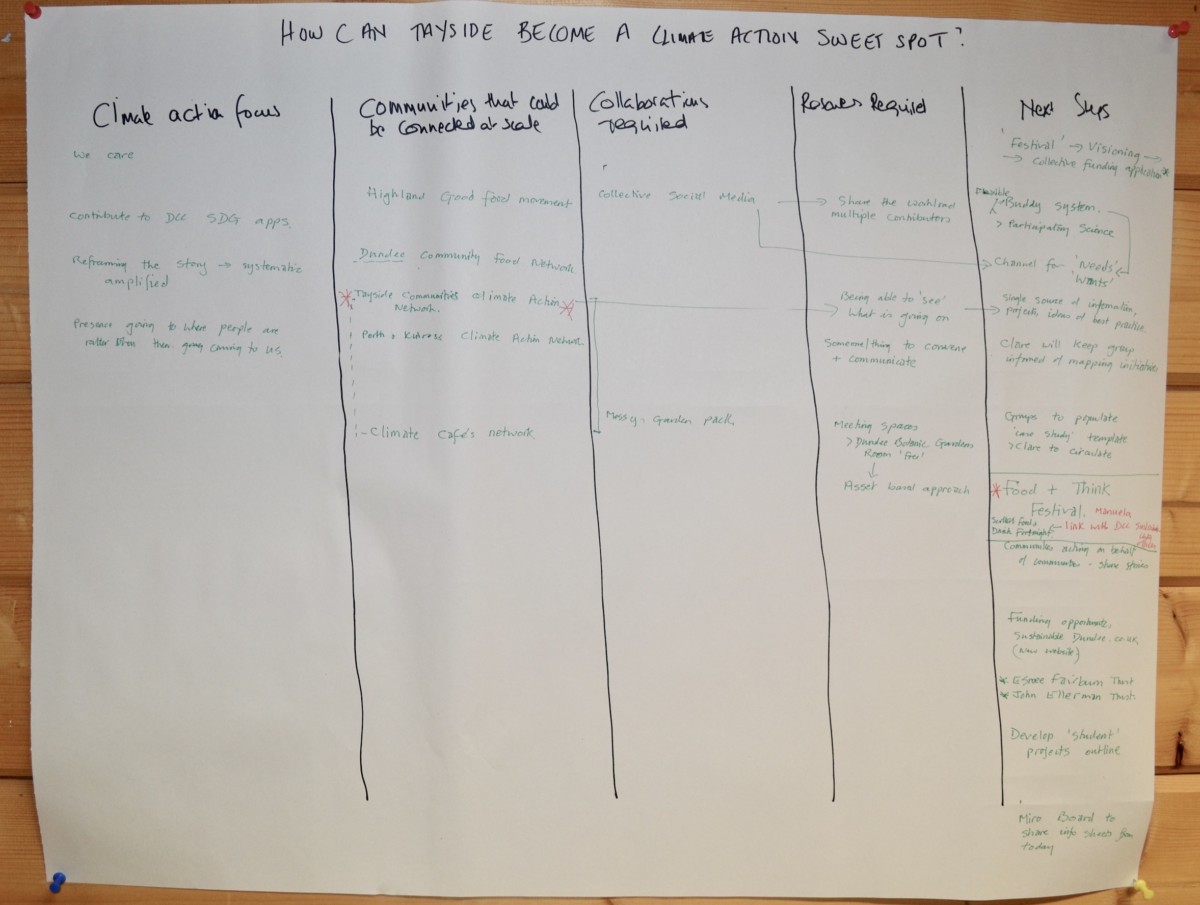 It was clear that there was much common effort going on around the following themes:

There were also a growing number of initiatives relating to travel and tourism.

Similar challenges faced everyone, from ensuring a broad representation of people in climate action initiatives to consistency of resourcing, from the big road blocks to change such as Local Authority procurement processes, to the complex stakeholder groups that needed to be involved in many nature restoration projects. There was also huge recognition of the need to develop new governance models to bring initiatives together. Models that could connect actors in civil society, the market and the state in new ways and at multiple scales and enable them to respond in an operating environment of constant uncertainty and surprise.

The sharing of information throughout the day and the physical mapping of projects had enabled everyone to begin to see just how many climate action initiatives there were already in Tayside and how, if we found new methods of of communicating and amplifying what we were already doing, we were already well on the way to building a movement towards positive social tipping points in all these themes. 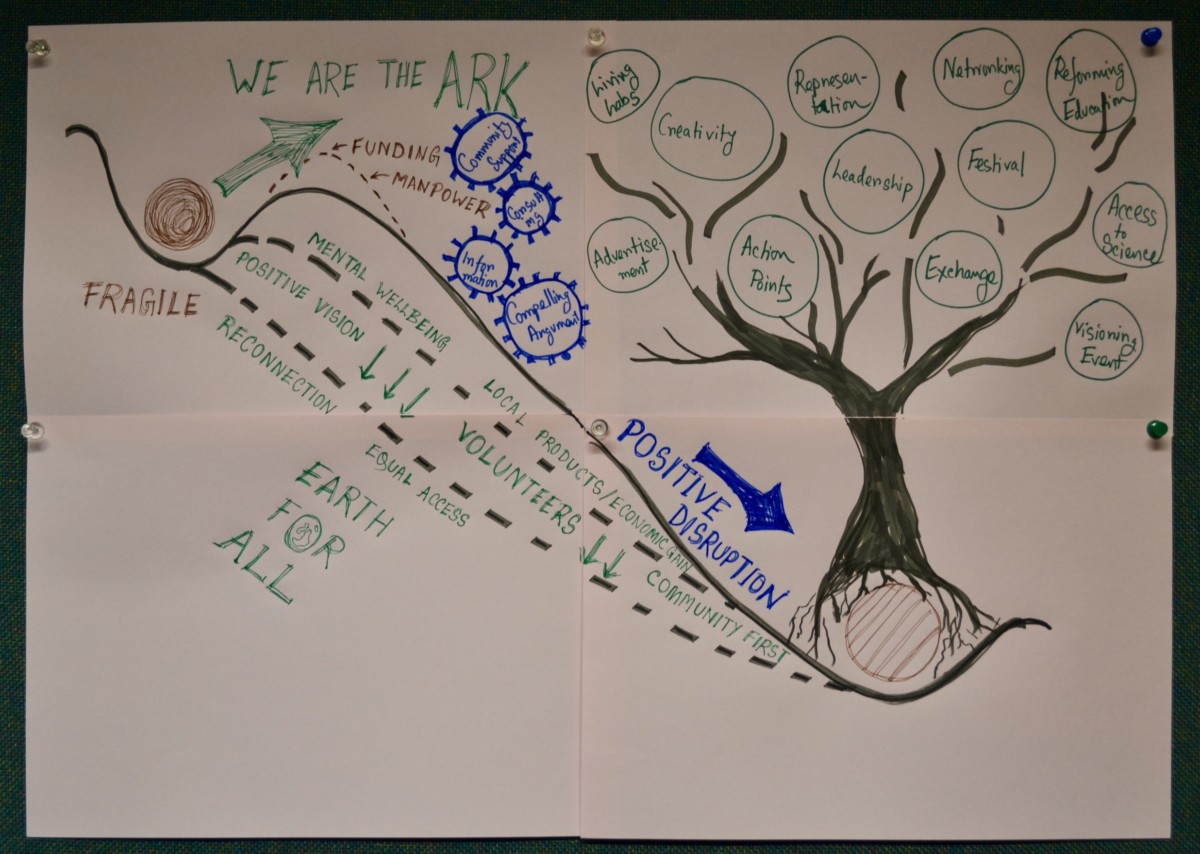 Our day ended with a new understanding of the enormous power of activating positive social tipping points, how the concept could start to be ‘landed’ in Tayside, a set of actions and next steps was outlined and agreement to start trying to model the first ‘sweet spot’ around the theme of food. Other themes would then be tackled as we learned our way into the methodology.

Powers of 10: seeking ‘sweet spots’ for rapid climate and sustainability actions between individual and global scales

This entry was posted in News

Bioregioning reframes the way we see the places where we live and work, helping us reconnect to and restore the ecological systems of which we area part and upon which we all depend.